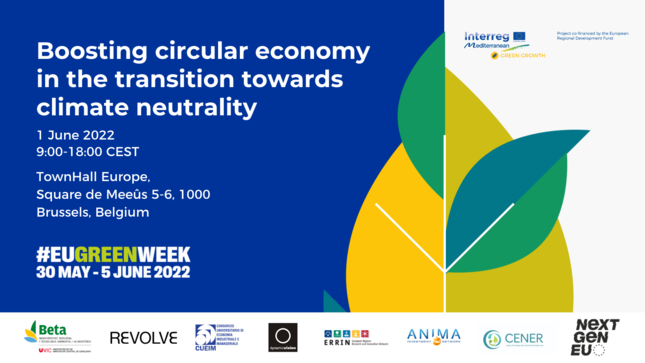 The Interreg MED Green Growth Community will celebrate its final event in person on the 1st June in Brussels. The event will highlight the role of businesses and public authorities in the transition towards climate neutrality, sharing the Community’s best practices in supporting these actors across the Euro-Mediterranean region. The final event will also emphasise the importance of cooperation to boost the circular economy and provide exchange opportunities in relation to the upcoming Interreg Euro-MED Programme's calls.

The Green Growth Community has in the past six years achieved tangible results contributing to national and regional policy frameworks in the Euro-Mediterranean region. Community projects such as GRASPINNO – which focused on eco-innovation, competitiveness and skills and has a follow-up project called GRASPINNO Plus – contributed to the Greek Growth Strategy for the Future and the National Action Plan for the Promotion of Green Public Procurement. Others, such as EMBRACE – working on food systems – shared its outcomes and resources with the government of the Spanish region of Aragon, to support the implementation of its circular economy strategy.

Over these six years, the Community has also focused on the key role of small and medium enterprises (SMEs) in the transition toward a circular economy across the Euro-Mediterranean region. The community project PEFMED – which has a follow-up project called PEFMED Plus focusing on the Balkan area – supported SMEs in France, Italy, Greece, Portugal, Slovenia and Spain to reduce their products’ environmental footprint. The ARISTOIL project – which also has a follow-up project, ARISTOIL Plus – worked as well over these years with SMEs in Greece, Italy, Spain, Croatia and Cyprus to reinforce the competitiveness of the Mediterranean olive oil sector.

The Community’s final event will be an opportunity to meet representatives from these projects, and hear their experiences first hand. The event will emphasise the importance of cooperation between different stakeholders and the need to change the operations approach of businesses and public authorities to transition towards climate neutrality. The event's speakers will include Miguel Luis Lapeña – Director General of Planning and Economic Development in the Regional Government of Aragon, who will share their circular economy strategy of Aragón region and their experience working with the EMBRACE project to support local businesses to move towards a more circular region.

The session will also receive inputs from European institutions. Maria Rincón – Team Leader on Circular Economy at the European Commission’s Directorate-General for Environment – will intervene to highlight the role of the circular economy to make the EU Green Deal a reality. On behalf of the European Parliament, César Luena – Vice-Chair of the Committee on the Environment, Public Health and Food Safety - will introduce the EU’s Waste Framework Directive.

The second part of the event will focus on the importance of cooperation among actors and territories to accelerate the shift towards climate neutrality, highlighting the need to involve all local stakeholders in this transition. Alessandra Sensi – Head of Sector, Environment and Blue Economy, Union for the Mediterranean – will open the second session by emphasising the need to extend cooperation in the Mediterranean beyond EU member countries. Francesco Lembo – Managing Director at ACR+ - will focus on the role of cities and regions to support the circular economy transition. The Green Growth Community’s project partners will build on the information shared by Sensi and Lembo, and hold a panel discussion to explore the role of local stakeholders in enabling the green transition. The panel discussion will be moderated by the journalist Cristina Giner. See the full agenda here.

The Green Growth Community final event will be an excellent opportunity to network, discover successful case studies, and exchange opportunities in relation to the upcoming Interreg Euro-MED Programme's calls for new thematic projects. Register for the event here.